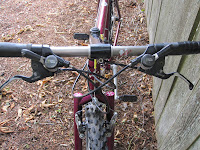 I've been fortunate over the years to own some cool bikes. Some of 'em have become cult or collector material for people in the know and it's great that people enjoy hearing about 'em now - for a peek back into the "good old days" of mountain biking.  I'm not a collector, just been riding mountain bikes long enough to own this stuff since it was new.  Yeah - I'm getting old. There's also some road bikes mixed in there, as I ride on the road as well.  It's all two wheeled good stuff to me.

I've been riding mountain bikes since 1984 - not exactly bombing Mount Tam with Charlie Kelly or Tom Ritchey - but certainly the Stone Age of mountain biking.  Especially for the East Coast, where I grew up and got involved with all this knobby tire, pedal powered fun.

I've been posting bikes in the chronological order that I acquired 'em - starting with a '84 Miyata Ridge Runner, then a '86 Fat Chance, followed by a '91 Bridgestone MB-Zip.  It's now time to fire up the time machine and set the dial to 1993....

As I mentioned in my MB-Zip post, I had plans to meet some old New Jersey pals in Moab for the 1993 Fat Tire Festival.  My current ride, the Zip, was cool - but in my eyes, not Moab material.  I needed something stiffer and little beefier.  I still had my old Fat, but wanted something newer.  I wanted a Yo Eddy, so the search began.

At the time, a few shops in the Seattle area carried Fat City bikes.  I remember test riding a sweet yellow Yo Eddy at R&E Cycles, but passed since it already had a dented top tube (ouch).  That wouldn't have affected the ride, but no way I'm picking that up.  New dough means farm fresh.  I then noticed a used Yo Eddy for sale in the newspaper classifieds.  Remember, this was the pre-Internet era - no Craigslist or eBay.  How did we survive?

I called the number from the ad and this nice guy drove over to my house to show me the bike.  It was '91 model Yo Eddy frame, barely ridden and built up very trick for the time.  XT derailleurs, shifters and brakes.  Ritchey brake levers, Cook Bros crank, IRD seatpost, Control Tech stem, Chris King headset, Answer Hyperlite handlebar, Flite saddle, SPD pedals, XT rear hub and Bullseye front hub, laced to Mavic rims.  Specialized Ground Control tires and Onza bar ends. Marzocchi suspension fork and the stock Yo fork included.  He wanted $1500 for it, a killer deal since the frame and fork alone fetched $1100 at the time.  After a test ride, the deal was done.  He even took a personal check - it couldn't have been any easier.  I now owned an official Team Yo Eddy.  Yes!

After a few rides on the Yo, I pulled off the Marzocchi fork and sold it to a riding pal for $150.  Even though I came from a dirt motorcycle background, thought suspension wasn't needed on bicycles (silly me). This was the early Marzocchi fork with the lightening holes drilled through the lower legs - don't remember the exact model.  I happily installed the stock Yo Eddy fork in its place.  I also swapped the SPD first generation Shimano pedals for some SunTour XC Pro pedals - complete with clips and toe straps.  Yup, I wasn't quite ready for the new generation stuff at the time.

I rode the bike in this configuration for about a year and thought it was the best mountain bike I ever owned.  Eventually, the suspension revolution caught up to me and I installed a Manitou 3 fork.  63mm of elastomer cushioned travel, complete with a greased rod for damping. Pretty high tech, eh?  I remember dumping muddy water out of it for "maintenance".  Even so, there was no going back to rigid forks.  The stock Yo Eddy fork was filed away for safe keeping.

I rode the Yo a lot - many dirt miles.  During this era, was riding off-road 3 - 5 times a week and raced occasionally.  Various parts came and went due to the use - truckloads of brake pads, chains, cassettes and chainrings.  Rims and entire wheelsets replaced due to mud damage.  A few Manitou fork rebuilds.  When the IRD seatpost cracked, replaced it with a titanium model from Ti Cycles in Seattle. When picking that up, couldn't resist one of their titanium handlebars as well.  Through all of this, the frame itself held up great.  Fat City made some quality frames.

This was my main mountain bike from 1993 - 1999.  That's 6 years of real world use.  Countless trail rides - quick after work spins and longer epics thrown in.  Cruises around the neighborhood, as well as dying in the Sport class of NORBA races.  And I did hit the 1993 Fat Tire Festival as planned, the Yo Eddy worked perfectly for the trip.

Fat City bikes and especially the Yo Eddy, were cool bikes to own and very respected - lots of approving comments from fellow bikers. Yeah, the attention was fun, but the best part was the ride and the quality of the bikes themselves.  They really made great stuff and even though Fat City closed shop over 10 years ago, people still know about them and covet the frames to this day.  There's a reason for that.  If any mountain bike company could stage a comeback (like Ibis), Fat City Cycles could do it, based on its past history.  Chris Chance - are you out there?

In 1999, I bought a new Ellsworth Truth - completely joining the crowd with full suspension.  The Yo Eddy was semi-retired and modified a bit.  I pulled off the Manitou fork and reinstalled the rigid Yo Eddy fork - carefully stored in a drawer, quietly awaiting it's return to glory. Some new Gore-Tex cables and Downhill type platform pedals, so I could cruise around with normal shoes.  I also installed a set of WTB cantilever brakes that I bought for a different bike years ago, but never used - that looked perfect on the Fat.  Since the changes, I've used the bike for rides with my son, Ian - in the woods, when he was younger and just learning how to ride singletrack.  I even pulled my daughter Amy around the woods in a Burley trailer on the Yo.  At the end of the rides, the Burley trailer windows covered with mud.  I occasionally consider converting the Yo to a single speed and may do so in the future.  Otherwise, it remains as is.

A few pictures and more gibberish from me...... 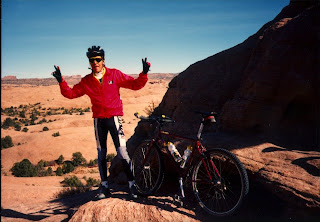 1993 Fat Tire Festival in Moab, Utah.  It was a fun week riding with old friends and meeting new ones.  I actually met Bob Roll sitting in a bike shop and saw Tom Ritchey riding down the street - complete with moustache and no helmet.  Moab at the time was the mountain bike mecca, with lots of bike media coverage and hype.  It was a great place to ride, would like to hit there again.  Here, the Yo Eddy rests comfortably against sandstone rock, while I model Oakley Eyeshades, Specialized mountain bike shoes made for clips and straps, and JT Racing padded tights.  Welcome to 1993, I'll be your Tour Guide. 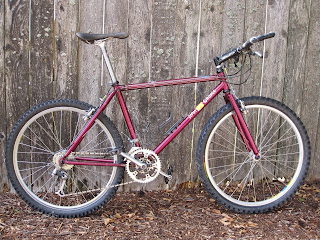 The Yo Eddy as it sits today - this time against old fence.  This is not a restored bike by any means, just a very well used example with scratches and wear to show for it.  As mentioned, platform pedals make it easy for quick cruising.  Original Flite saddle is hammered and looking tired.  It's bikes like this that make the phrase "Steel is real" a true statement. 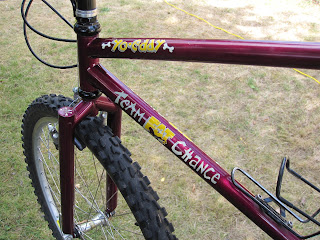 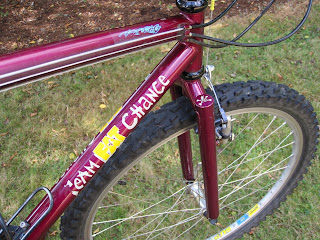 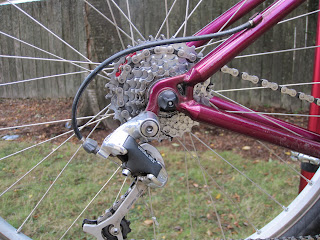 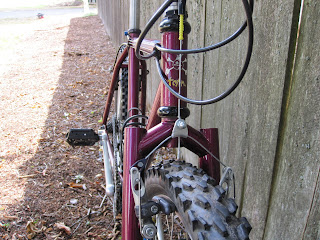 View from the front.  Team Yo Eddy sticker stares ahead, over WTB cantilever brake. 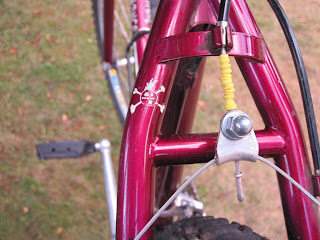 Tiny Yo Eddy sticker guards the rear.  Check out the small gusset where the seatstays join.  Nice detail on the Fat frame.  Plenty of room for fat tires also, up to 2.5" as advertised at the time. 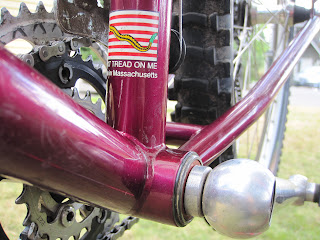 Classic Don't Tread on Me, Made in Massachusetts sticker graces the seat tube.  Unique Fat City bottom bracket with pressed in bearings. Light and easy to adjust chain line - however, have you ever tried removing 'em once wedged in there?  Not fun.  Also notice back side of crank, complete with adapter to run 22 tooth ring - made by Avid (if I remember correctly).  While you're staring, admire the clean TIG welding on the frame - nice. 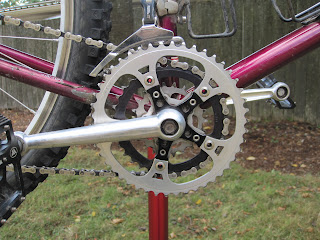 Cook crank, very trick for the era.  Mine actually have material worn away where my ankles brushed the crank arms.  Yeah - this bike has seen some use.  The sliver, black, silver chainrings look great - if I can say so myself. 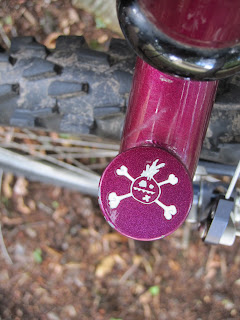 One of the coolest rigid forks ever made.  Yo Eddy sticker on each fork top stare you down on every ride. 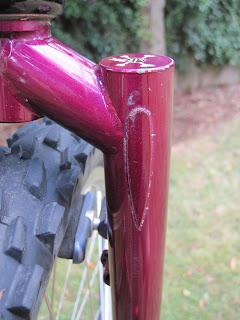 More fork detail.  I'm guessing these gussets stiffen the fork a bit - why else in this location?  In any case, great details and craftsmanship. 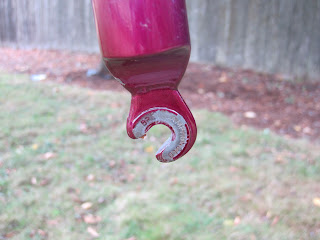 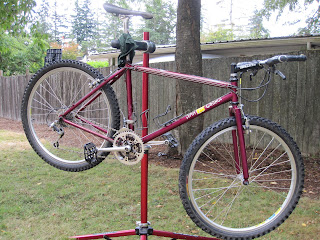 The Old Fat still cleans up nice.  I actually washed it for the "photo shoot" - if you can call it that. 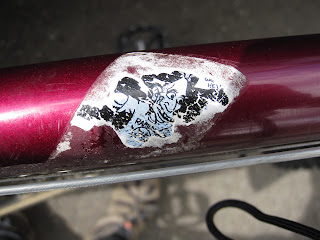 Homemade Ramones sticker slowly peels away from top tube.  Gabba Gabba Hey.  We accept you, we accept you, one of us. 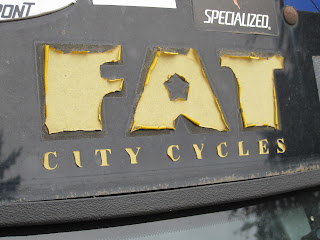 Fat City Cycles fades away, but not forgotten by all.  Is it better to burn out, then to fade away?

This concludes yet another installment of Personal Rides on my little slice of the Blog-O-Sphere.  Thanks for tuning in, stay tuned for future episodes - complete with more written fluff and poor photography. Just doing my part to fill up the Internet with ancient bike info and a little history.  I hope you enjoyed it.

Until next time, keep the cranks turning.  How's that for corny?