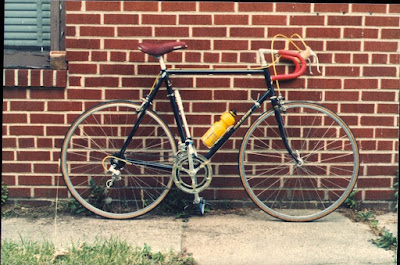 I picked this bike up in 1984 or 1985, probably 1985 – will have to wait for the carbon dating test on my brain to be sure. At the time, I was riding my mountain bike a fair amount and wanted a road bike. One of my bike shop pals, Dave Cohen, offered to sell me his slightly used Raleigh Competition frame with a few additional parts tossed into the deal – old Campagnolo crankset and shifters, Weinmann brakes and levers, and a beater set of wheels with Campy hubs and rims that I no longer remember.

The frame was an early ‘80s Japanese Raleigh, lugged with Reynolds 531 tubing. Smell the steel. I grabbed parts from various sources, including Bike Nashbar and Performance. This was before the Internet and mail order was sort of new for the bike industry. This was also before indexed shifting and you could run any sort of shifter and derailleur combo and it worked fine – and 6 speeds was plenty. I added Suntour Cyclone derailleurs and pedals, Selle Italia Turbo saddle (in suede!), cables and whatever else was missing - and had myself a nice road bike.

Later, I replaced the flexy Campagnolo crank for a Suntour Cyclone crank, and the beater wheelset for a new pre-built wheelset with Suntour Cyclone hubs and Mavic rims. This bike had a great ride with the classic steel feel, slightly flexible, but smooth. Being the standard design for the time with plenty of clearance, could also run fatter tires for more comfort. One of my riding loops had a short section of dirt road and this bike felt great on it.

I bought a cycling book by Greg LeMond during this era and changed my position, as per Greg’s set up – using a string and bob to set saddle set back and saddle height as per leg length. Wound up raising my saddle at least an inch and farther back on the rails. It felt perfect and I still use this position 20+ years later. I also picked up my first pair of racing shoes at Cyclesport in Park Ridge, New Jersey - complete with cleats for toe strap pedals. I still have the shoes in a box at home, as well as the Cyclesport cycling cap the sales guy threw in for free. Oh yeah - and the Greg LeMond book.

This bike introduced me to longer distance rides at a much faster clip then the mountain bike. That feeling of speed you only get on a nice road bike - skinny tires singing on the pavement, hands on the brake hoods, elbows bent, scenery buzzing by as you - the motor - power the whole experience.
A few rides on this bike stand out in my memory. One where I left the house for a quick ride – dressed only in bike shorts - no shirt, no water, no food and no money. The “quick ride” turned out to be a 40+ mile ride during the hot, humid New Jersey summer. Even so, when I returned home, I felt fantastic and was psyched that I rode from Mount Arlington to Hackettstown and back. At that time, 40 miles seemed far and nothing felt better then doing it under your own power. I still have that feeling now on rides and maybe that contributes to why I never get tired of riding.

The other riding memory from that era involved a ride with a flat and a long walk. I was about 15 miles from the house and flatted – no big deal, except my spare tube was toast and my patch kit glue was dried up. I somehow got the patch to stick for a few minutes at a time, stopping to pump the tire up to rideable pressure a few times. Eventually it was useless, so I started to walk home.
After a few miles, walking in my fancy new racing shoes became torture – so I continued home in my socks. Probably walked about 5 miles total, enough to make sure I had everything needed to fix a flat the next time. Before the flat, I also had some BMX kids chase me, yelling “Hey, Racer Dude”. I put my head down and took off, thinking it would be pretty lame if they caught me.
They didn’t catch me.

I rode this bike from 1985 to 1991, then sold it to a co-worker pal after I replaced it with a Bridgestone RB-1. Paul Bartley, who bought the bike off me, still rides it today. This is one bike I wish I hung on to – would be a cool, old school classic now.
Posted by Dan O at 2:59 PM